Where did it go? I was supposed to write a round up of the goings on here at Bosworth HQ mid year, but it’s practically Christmas now. Hopeless. So, in no particular order and using the Battle of Bosworth and SS Facebook page as an ‘aide memoire’ this is what has happened since the end of vintage. We had rain! Loads of it, and we sure needed it. The creek looks terrific: 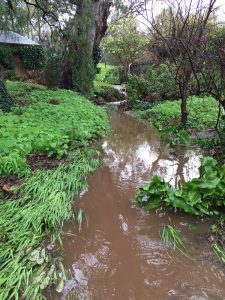 This super winter rain proved the Australia Post driver’s undoing, as he got a little lost and then got bogged as he tried to find his way to the duck house to collect our parcels. Sadly for him I was on hand with my pesky iPhone to take a couple of shots. I did pop him up on the BoB facebook page, where it turns out from comments that his usual route was around Langhorne Creek. His usual winery customers enjoyed his plight very much. Needless to say the gods took a very dim view of me making fun of poor Dave, and so literally seconds later when I walked into the office and opened the mail, there it was, a big, fat speeding fine. Hubris indeed. 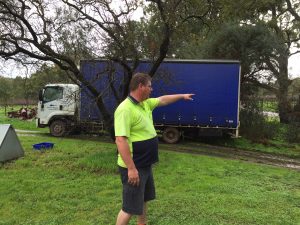 We had a birthday! Cellar door turned 5 years on Friday August the 12th. Thanks must go to Bosworth stalwart, Roxie Deacon who nagged Joch and I to get a bleedin’ move on when it came to opening up. She submitted the council applications and hounded their employees and us! Well done Roxie. Here she is with our first ever cellar door customer, Shane Barker. Cheers Shane. 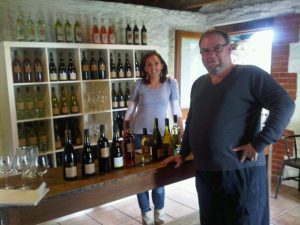 We have had a little time in the sun – the media sun that is. We sent off all 7 vintages of the Puritan Shiraz to a few wine writers so they could see how the style developed over time – given the wine has not added preservative, this was going to be interesting. Max Allen ran an article in the Australian Life section on Tuesday August the 2nd 2016. You can read it here. I love the shot they used of Bozzie relaxing on the old David Brown. I have used this before; it ticks all the boxes. Beard, Coopers beer (somewhere), David Brown tractor, still smiling despite an intense vintage (2014) 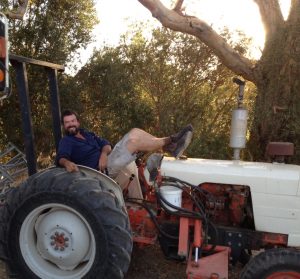 The Battle of Bosworth 2014 Ding’s Single Vineyard Shiraz scored a whopping 95 points in Tony Love’s Top 100 wines in the Advertiser, which was very pleasing (this wine is still available.…) 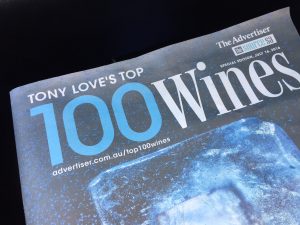 The review was terrific: 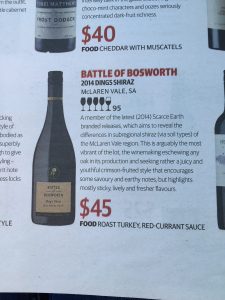 And the the piece Tony did on s was pretty good too! This was on page 9 of the Advertiser in the week running up to the Top 100 wines release in the Tiser on the Saturday. Great stuff! Just for your information – the Ding’s is not 14 bucks per bottle! We did have a couple of phone calls from people who read the banner above our photo and thought, jolly good, what a well -priced wine. We of course think Ding’s is very well priced for such an amazing wine! 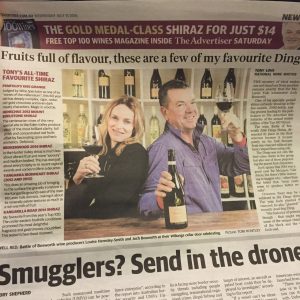 The Battle of Bosworth White Boar has done well in the hands and palates of the guys from The Wine Front, Mike Bennie and Gary Walsh who came down and tasted their way through a swag of Vale wines over the Queen’s long weekend. The wines were all tasted blind and the Boar came up smiling, with 94 points. Mike waxes almost lyrical with his words ‘Molten tannin flows over concentrated dark fruit in the mouth. Holds a full figured, plush line. Saturates the palate beautifully 94 points.’ Nice. Still available at cellar door…

Over in the west, wine scribe Ray Jordan rated 2 Bosworth wines in his Top 100 Reds in the West Australian, namely the 2016 Puritan Shiraz (89 points) and the 2014 Battle of Bosworth Shiraz (93 points), which was terrific. The will both be released at cellar door very soon. 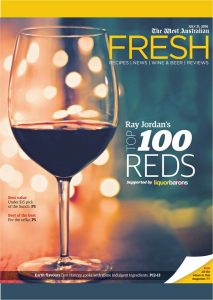 I went travelling a little as well. I went over to support our Western Australian distributors at their inaugural ‘Pop up’ Trade show which was held at Perth City Farm. It was incredibly well supported by the WA trade and great fun. Owners husband and wife  Matt and Clair and their magnificent team did a terrific job, and even catered the event, making some very delicious slow cooked brisket buns and coleslaw to feed the masses. I have requested the recipe but have so far heard nothing back. I think they are still recovering. 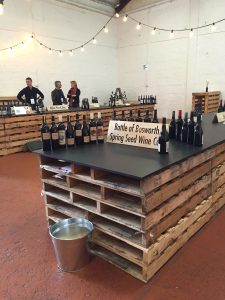 I also went south, well south east, to visit Sue Bell at her Connawarra Bellwether wines for the annual Sips in the Sticks. This wonderful event celebrates regional food, wine and culture. The chef this year was Stefano from Mildura. what a great bloke he is. 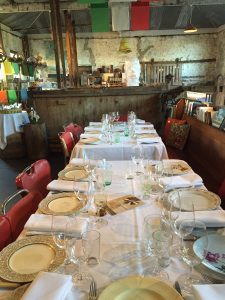 This year the theme was the impact on regional Australia of Italian migration. I missed last year’s event (when the theme was Spanish) so went in full bore this year with my Graciano and a Crème Cassonade, pretending the theme was still Spanish as I don’t have Italian varietals. I even made my own almond praline. You can see it below before I pounded it to death to make ‘crumbs’ which I spread on top of the cassonade; I was not confident of using the blow torch to make the normal brulée type crunchy top. 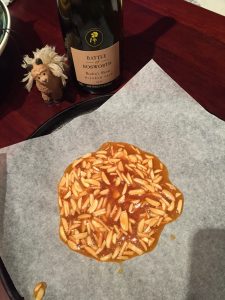 I particularly like the styling in the photo – the bottle of Braden’s Shiraz AND the Little People (brand of kids toys) alpaca. Go figure. I don’t actually know what I was thinking when I pulled these disparate items together; I assume the raw panic of making a dessert to be judged by the legendary Stefano di Pieri from Mildura had reduced my brains to mush and I just grabbed anything. By the way, my Crème Cassonade got an honourable mention in the judging… best ever result, I think I can retire now.

Well that’s all for now folks. Next post should involve more travel as Bozzie heads to Japan and me to Hong Kong. What could possibly go wrong…