Well here we all are again. It’s vintage time (or harvest) and all over McLaren Vale there are tractors and harvesters buzzing about, which gives you the big hint: it’s show time! I believe it’s been the earliest start to vintage ever – but am more than happy to be corrected. There was a windy lead up to harvest (well, we do live in windy Willunga I suppose), when it felt like it blew a gale for 40 days and 40 nights. The sausage dog found these conditions trying.

Inevitably the strong winds brought down some tree branches, which needed to be cleared up. We used the services of someone from the Texas Chainsaw Massacre to help with this job. Oh, hang on that’s Ian Adam, isn’t it? Look away, Safe Work SA. PS that is the limb from a magnificent river red gum down near the 3 corner block Mataro.

Because of the early vintage, brought about by the dry winter and spring, we had more issues with birds than normal. We always struggle with the pesky starlings who are incredibly smart at knowing just when the grapes are beginning to get some sugar in them. We also had lots of the lovely bright lorikeets on the hunt for grapes this year.

It was also hot – we had a very hot December, which probably helped bring things on quite fast. Oscar wasn’t so keen on those conditions as you can see; he’s cooling his heels in the water trough.

To combat the birdies we netted the vines – earlier than usual. You can see Spencer waving from Ding’s block, and somewhere in there is James, AKA Woody. Then Joch brought in the secret weapon. Yes, technology finally came to Battle of Bosworth wines in the form of a drone. Oh, what fun the boys had watching it fly, and to be honest, it is mesmerising to watch. Sounding like a mob of African killer bees (I might be over-egging the sauce here) it was programmed by young Brad Cameron from DJ Growers Supplies to fly round the vineyards and scare off our feathered friends.

The birds hated it, and the local hawks didn’t know what to make of it either. Did it work? Possibly; in conjunction with the nets plus Joch driving round firing randomly with his shotgun, scaring both the birds and cellar door customers. Technical talk? Part of an integrated pest management approach, but HEAPS of fun to play with.

We had rain, too, never mind technology. Yep, we had about 50mm of rain, give or take, a few days before we started picking the whites. Could have been a disaster but I think Joch managed to dodge the rainy bullets. In the end it was a godsend – the vines lapped it up and positively bloomed. The lawn loved it too. 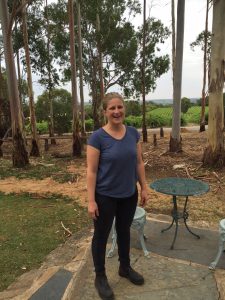 We joined the 21st century this vintage and employed the most excellent Jen Pedder. To explain, she is a lady, the first lady we have had working in the cellar apart from Emma Loretan who did a few pump overs, and Leonie ex-book keeper Broadbridge, who was temps and beaume girl. We lured Jen away from a cheesy career as manager of the Say Cheese stall at Adelaide’s Central Market. She is also a trained winemaker who has done vintages at Yarra Yering, Primo Estate and Ashton Hills. Brave, brave girl. Here she is before the storm!

I did discover by some Facebook sleuthing that not only did Jen’s husband Russ come in and lend a hand one Sunday, but that it was also their first wedding anniversary that day. Well done team and here’s to many more. Thanks for helping with the pump overs too Russ!

The new vintages of the Scarce Earth Project are available to taste and purchase in cellar door and online. For those that know the Scarce Earth wines, these are single vineyard Shiraz wines made with minimal (or no oak in this case) which reflect the subtle nuances of the soil types on which the grapes are grown. You be the judge. Above you can see the 2013 Chanticleer Shiraz and the new single vineyard Ding’s Shiraz. The Braden’s shiraz didn’t make it through the stringent selection process this year. Too much oak we were told. Joch reckons the oak character is actually a character which comes from the vineyard, but that’s a story for another day.

I am heading off to Germany for Prowein again in a few weeks. Prowein is a massive wine fair located in the Messe exhibition hall in Dusseldorf.  Battle of Bosworth and Spring Seed Wines will be on the Wine Australia in Hall 9. The halls are so big I almost got lost last year in between Bolivia and Greece. I will be catching up with distributors, a few buyers, hopefully snaring a couple of new customers, having a drink or two with some old mates and eating my body weight in pork knuckle and sauerkraut.

I’ll also be at East End Cellars on the 19th March for East End Wine Down from 12-6pm. As I will only get back from Germany a couple of nights before this event, I will probably be jetlagged, so please bear with me. Tickets are $35.00 and they can be purchased from East End Cellars (08 8232 5300) I will be showing the new Touriga Nacional and the Graciano, plus others. Come on (wine) down!

OK until the next blog, cheerio, and we look forward to seeing you up at cellar door again soon.