Well it’s almost time for last orders at the bar here at Battle of Bosworth for 2016 and what do we have to show for it? Water, that’s what, and lots of it. We had rain in epic, almost biblical proportions this winter, a far cry from last winter which was the polar (excuse vague weather/ climate pun) opposite. In fact, the rain has kept coming even this far into spring, almost summer. It can stop any time it likes now. See Celia doing some thoughtful wading just in front of the harvester shed. 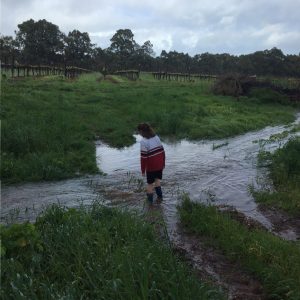 In staff news we have had some movement here at Bosworth. We were sad to see Crème Brûlee the cream rooster leave us unexpectedly one night after someone forgot to lock the chickens in.  However we quickly found a replacement via the miracle of Facebook, and so a big welcome (and a bucket load of good luck) to Papa Lazeroo who started almost the next day. He is a mixed breed with a hint of Wyandotte, for chook aficianados. As for the name, League of Gentlemen fans will know exactly what I’m talking about, and shudder. 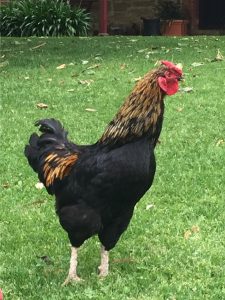 Bron the book keeper had a ripper of a result at the Barmera Murray(Wo)Man competition held in the Riverland, a half ironman type triathlon which involves running, cycling and swimming (in open water) ludicrous distances. Bron took the trophy in her age category, and obviously we don’t ask what that category was now do we? Big ups Bron! 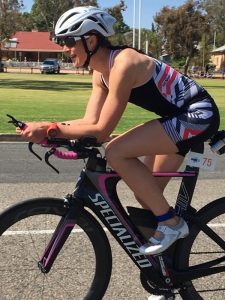 Well the wind has changed and like a cross between the swallows of summer and Mary Poppins, we have lost dodge plough master Leon Koch to the grain harvest up on the Eyre Peninsula, or was it the Yorkes? Anyhow, we look forward to seeing you again soon Leon when the wind changes once again. 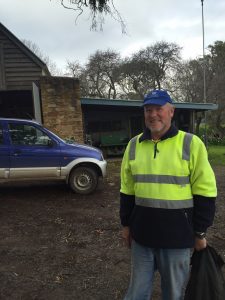 We have had plenty of visitors in the last few months, and at the same time both Joch and I spread our wings and went a-visiting. Joch headed off to Japan for a look-see and spent time with Shunji our importer in Tokyo and Osaka. He helped man the stand at the Wine Australia/ Austrade Grand Wine Tasting in Tokyo too. He really enjoyed the food and as you can see if you look past Shunji here, looks like he’s been enjoying the sake too! Thanks for looking after him and sending him home safely Shunji, we do worry a little when we let Joch loose. 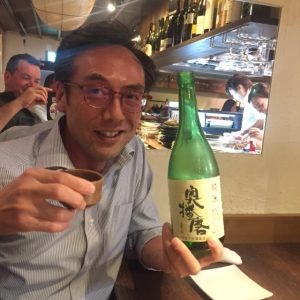 I went to Hong Kong to catch up with our importers and do a few dinners and tastings, but sadly fell sick over there (not alcohol related) and was confined to the hotel room before shuffling back home to spend some time being waited on hand and foot in bed for a week (Joch loved that). I did manage to catch up with James Busby alumni Zachary Yu at one tasting, before I retired off the field, hurt. 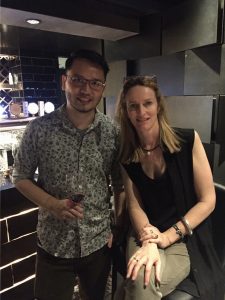 Here’s the dinner I would have been doing had I been match fit! Sorry to the team at North East for piking, and for Darren Rathbone for standing you up! 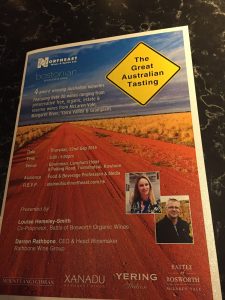 Tim Wildman MW and his international team of wine people on the James Busby tour arrived for some organic instruction and tasting. Naturally enough, we loaded them onto the grape trailer with 1930’s pews as seating and trundled off to Chanticleer and Dutchmans blocks to taste the single vineyard wines produced from those vines. Tim said a little prayer for us, which was answered – perfect weather. 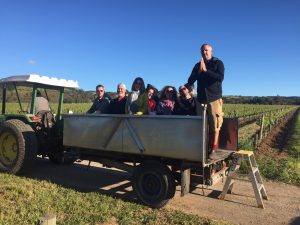 We then went back to cellar door for more tasting and Joch and I were introduced to dabbing (a term my kids are familiar with) – it’s all the rage with young folk I gather. Here’s the Wiki definition ‘… a dance move in which the dancer simultaneously drops the head while raising an arm and the elbow in a gesture that has been noted to resemble sneezing’ Awesome. My kids saw the video of us doing a group ‘dab’ and screamed incredulously. Here we all are ‘dropping the mic’. You google it. Cool, eh? 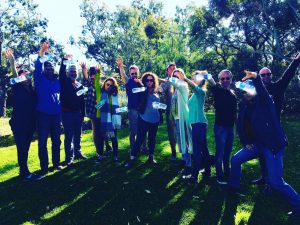 Laura Jewell MW and Mark Davidson from Wine Australia brought a terrific group of WSET students (past and present) from all over the place, and Joch gave them a very in depth look at organic viticulture and sustainability. 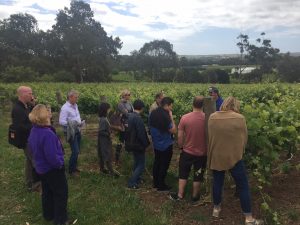 The flies were shocking and it was pretty humid but everyone cheered up after a home made scone (my pleasure) and a drone flying session. The drone never fails to entertain. Questions about the legality of flying it without a license or night flying were quickly brushed off. Joch had also attended a Shiraz speed tasting for the same WSET people where he showed off the 2016 Puritan and the 2014 Bosworth Shiraz. That’s Gary Schueller from the USA testing Joch’s knowledge. I think Bozzie is making something up there, look at his face. 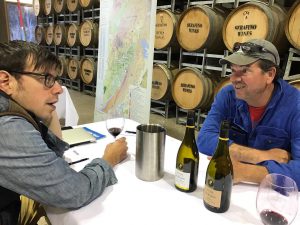 We all went off to the annual Mclaren Vale winemakers lunch (the proper name is way too long – but I hereby acknowledge all of our wonderful viticulturists, and the tourism operators!) and had a ball. We were hoping for a trophy with our 2016 Battle of Bosworth Touriga Nacional, but got pipped by a Montepulciano. Still, we are very happy that the 2016 Touriga got a gold medal, as it is only it’s 3rd vintage. So fresh and floral. The 2016 Graciano got a bronze as did the 2016 Spring Seed Rose. Below you can see the girls from BoB – and Woody. 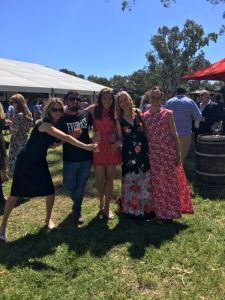 The worst dressed award was fiercely contested but I think Joch carried it home with his stunning and utterly authentic Hawaiian shirt. Runner up was my former boss Zar Brooks from Dandelion Vineyards with a stained polo shirt. Class was bought to the photo by the glamorous lady to the left, who was she? 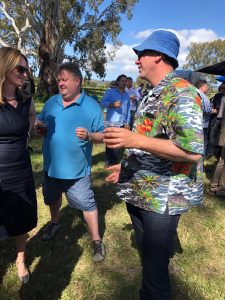 The theme of the lunch was Agriculture so there were a couple of Kubota tractors parked up, but someone left the keys in them. I can’t quite see who that is stepping out of one of them. 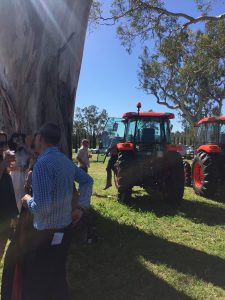 When we went back next day to collect my ute we found a mysterious crop circle. Donut anyone? Very funny to watch. 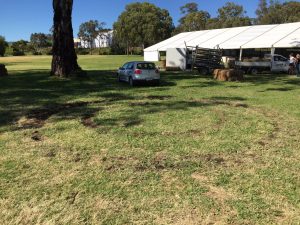 Finally a good news story in that we have made a small move back into the USA market. We have just shipped a small consignment of Puritan Shiraz over to California where it will be making its debut on the shelves of Raley’s Family of Fine Stores, a family owned high end group of stores located all over California and some in Nevada too. Raley’s just won 2016 retailer of the year award in Wine Enthusiast Magazine. I hope the new political arrangements in the USA are conducive to our market foray! 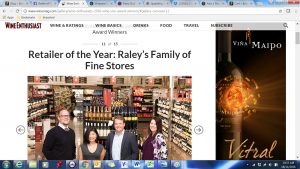 We have some new vintage wines in cellar door which are well worth a visit to try – namely the 2016 Spring Seed Rose, the 2016 Sauvignon Blanc, the soon to be released 2013 White Boar and 2016 Bosworth Chardonnay. So many wines….

Best wishes for the end of year and over Christmas and we look forward to seeing you at cellar door (open every day other than Xmas Day, Boxing Day and New Year’s Day) or hearing from you.