Another massive year has been recorded here at Battle of Bosworth, in terms of effort expended, wines made (and sold), tales told, vineyards groomed and ultimately alcohol consumed. There have been some trips, some sales calls, a few lighting visits, some photo bombing (Oscar dog) and some new products, or at least variations on a theme. 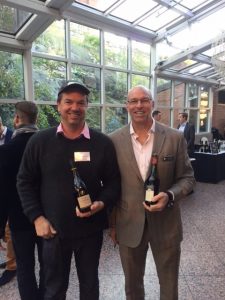 I sent Joch off on tour of the UK and Sweden, Norway and Finland to sell some wine and meet some people. I think he had a good time. The tour was part of a Wine Australia tasting program and started off with a premium Wine tasting at Australia House in London. Above you can see Joch with Mike Brown from Gemtree Wines at the Nordic tasting in Finland. At least Bozzie is not wearing his Hard Yakka shirt for once. Mike looks very dapper. Not as good as Prince Haakon of Norway though in his dress uniform, below with his princess, Wine Australia’s PR supremo Hannah Silverman. Take that Mike Brown!! 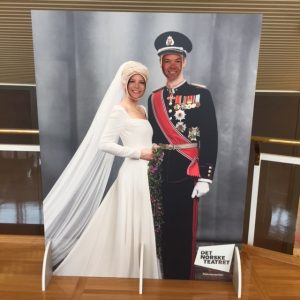 Joch poured wines in all countries for both trade and consumers alike. When subjected to a debrief on his return it very quickly transpired that he preferred the Swedish and Norwegian scenery out of all the countries he visited… :) 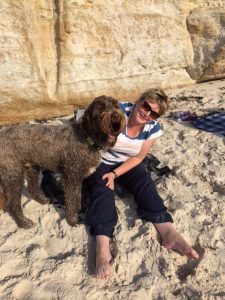 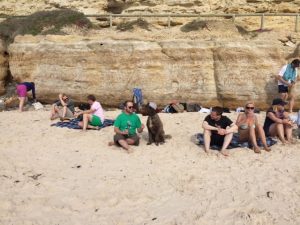 Oscar has had a good year, too. I helped host a group of 40 odd Masters of Wine from all over the world at the magnificent Port Willunga beach, after their lunch at the Star of Greece. Oscar came along for the ride and made lots of friends, including Matthew Hemming MW (who is an alumnus of the James Busby trip of 2012) from whom he borrowed the baseball cap and Beverley Tabbron MW from Druitt Vintners. I used to work with Beverley when she was at Hallgarten in the UK (she still works for them, but it’s got a new name now) and I was at Penny’s Hill. Many moons ago now… 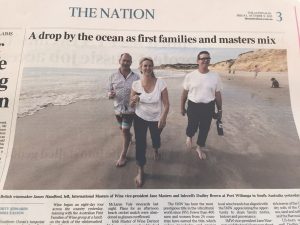 Oscar also managed a quite magnificent photo bombing effort (look at the top right of the photo) and made it onto p3 of the Australian national newspaper. Good dog Oscar! Talking of James Busby Travel, we welcomed the 7th group of international trade and wine educators, who signed up with Tim Wildman MW to come and taste Australia. We drove the group of 12 around to some single vineyard sites (Chanticleer, Dutchman’s and Ding’s) and tasted wines which were grown on those very sites. 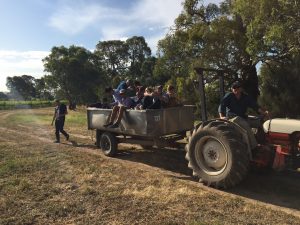 And goodness me what splendid transport we laid on for these people. They were seated on some 1930’s pews which were placed in a grape trailer and pulled along by Joch’s all -time favourite tractor, the old David Brown. It was brilliant. 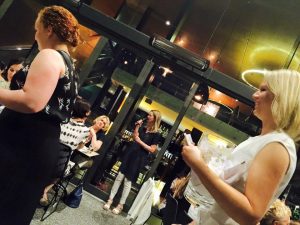 I went up to Brisbane and along with Founder of the Fabulous Ladies Wine Society Jane Thomson (Jane, above right, me at the back looking nervous and clutching the microphone), hosted a very fun dinner at Aquitaine on Southbank. Those women are wild up there! A terrific night I think was had by all.

More tastings…way out West – a little too far to travel to, so old mate and former Vinpac contact Kaya Reeves (Vinpac bottle and warehouse our wines in McLaren Vale) poured our wines at the Floreat surf club in WA. Thanks Kaya! 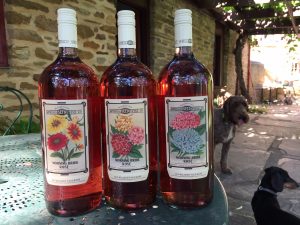 Supersize me: neatly segueing from that picture of Kaya holding a bottle of our Spring Seed ‘Morning Bride’ Rosé, check out the bottles above!. What beauties – behold, the magnums of Spring Seed Rosé – all 1500ml of it. Very handy for when the fridge is just that too far away. They come in packs of 6. Sausage dog and Labradoodle NOT included. 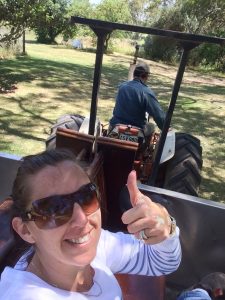 Roxie clocked up 5 years working here at Battle of Bosworth wines, proving once and for all that you don’t have to be mad to work here, but it helps (ha ha ha). Here she is being guinea pig on the grape trailer and the 1930’s pews, testing the route for the James Busby guys. 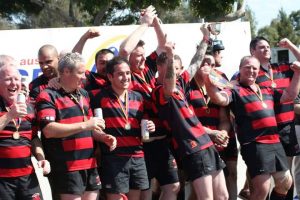 Man for all seasons Ian Adam went ‘en vacance’ (we thought he was on holiday, judging by all his Instagram photos) to the Loire Valley in France in September to work a vintage at a winery near where Aurelien ‘Snailbreath’ Gousse grew up. Aurelien worked vintage 2015 here at BoB and was a valued member of the team. Of course Ian managed to make it into the local news, great work Ian. Ian will be back to do vintage 2016 here at Battle of Bosworth. 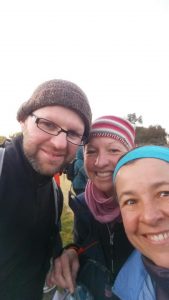 Battle of Bosworth cellar door operatives, husband and wife team Mark and Georgie (Gigi) Koen (plus sister Liz in the middle) undertook the Herculean feat of walking to Adelaide from Willunga, some 50-odd km’s. Ouch! As members of the ‘Willunga Wanderers’, they helped raise money for the Hutt Street Centre which helps Adelaide’s Homeless. It’s a great cause, and for the 2nd year in a row the Wanderers raised the most money of all the groups, some $40k +. What a great effort, well done. (PS Emma Loretan also did the walk, but we couldn’t find a photo of her anywhere, even on Facebook!)

Winemaker Nairn won a bike! He won it by drinking beer, even better. Drive carefully Nairn. OK, that’s all for now, but I suppose it would be remiss of me to sign off without providing some tips on how to keep cool in the summer ahead. Of course this entails dusting off this shot of Ian Adam in his bucket under his avocado trees…it’s a beauty. Happy Christmas! 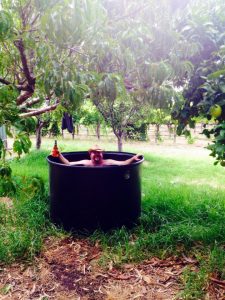