It’s all go in the vineyard at the moment, after a pretty wet winter. Joch’s father Peter gets drafted in to do the all-important dodge ploughing. As no doubt I’ve mentioned before, being organic means we can’t get rid of winter weeds using chemicals. This job has to be done mechanically and Peter is the grand master of the dodge plough. It looks simple enough, as I watched Peter come up the row towards me to take this shot, but it’s pretty obvious it takes considerable concentration and skill.

Peter (above) is coming up the Orchard Chardonnay. You can see he’s looking over to see where the vine is, so he can pull out the plough  in time to avoid cutting it off, which of course would not be the desired outcome, as they say …’metal poisoning’,  as one of Joch’s old Wagga mates called it. She also called the dodge plough the ‘silly’ plough….

Peter took these shots (below) of his work on Dimich’s block, a new vineyard for us, which we are in the midst of converting to certified organic viticulture; it’s in it’s first year of conversion – the big giveaway is that there are almost NO soursobs. You can see the before dodge ploughing shot….(that’s Peter’s thumb I think) 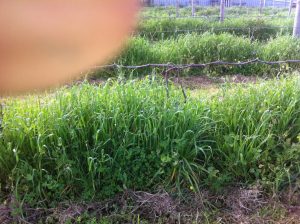 …and the after shot… You can also can see that these vines have been grafted. This involves the vines being cut-off (by someone wielding a chain saw) and then having a new variety grafted onto them. The white band shows where the bud has been grafted on to the vine. Grafting vastly shortens the time the vine is out of production. The root system of the original vine is already well-established, all we need to do is graft over the new variety and within a season or two, we are back in production. 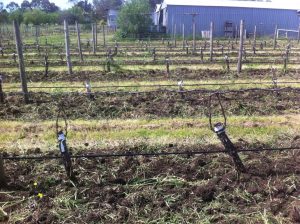 In the case of this Dimich Dam block, we have grafted Shiraz over Chardonnay. Somebody has to cut off the strings which were used to train the grafts up to the wire. I watched the Blues Brothers the other night (for the first time in about 20 years) – remember, where Jake and Ellroy ‘put the band back together’?

Well, I think Peter Bosworth must have watched it too, and been inspired by the good ole Blues Brothers, because above you can see none other than Anthea Bosworth, the other half of the successful PI and AC Bosworth ‘band’ doing the string cutting job! Peter and Anthea set up the original vineyards back in the 1970’s. Thanks for coming out and doing this Anthea.

On another note have a look closely at the nest above the wisteria (which is outside our front door)  in the photo above. I think the pair of Willy Wagtails who decided this would be the perfect place to raise their family are seriously deluded – they’re not the most relaxed birds at the best of times; they’re having kittens at the moment as our kids, the chooks, the dog and more worryingly, the cat are disturbing the mother bird as she tries to incubate the eggs. Good luck!