Blimey, we’ve had some rain this winter. I think the figures show we’ve had the wettest August on record here in South Australia, or maybe I read that about another state and/or region. Either way, Willunga has been deluged with the wet stuff.

I’ve looked back at my old posts and see that precipitation – waiting for it, watching for it, regarding the consequences of either getting it , or not getting it, features heavily in my content. Nothing much has changed then since coming to Australia from England and a childhood where we talked about the weather and practically nothing else. Sunday saw the biggest downpour we’ve had on top of lots of other downpours. The result is not hard to imagine, but here are some of the photos in case you were in  any doubt. 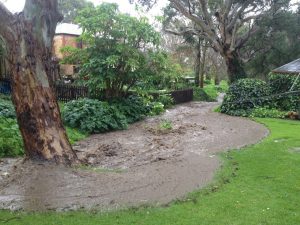 All the photos were taken by Ian who came in to work in cellar door. He also took a terrifying video of the water rushing down what is usually our winter creek (ie dry in summer). 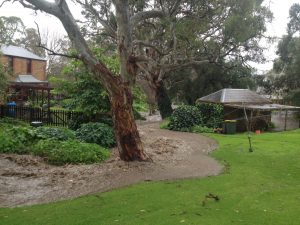 You can see our house to the left, and to the right, our little ‘duck house’ which is the guest room and sometime storage shed for wines to be picked up by the nice Australia Post man. The duck house narrowly missed being flooded – it copped it big time last year, when we had to get a new carpet for it. Joch, ever pratcical bought some very unattractive marine carpet, the material used in boats. Not so silly I suppose. 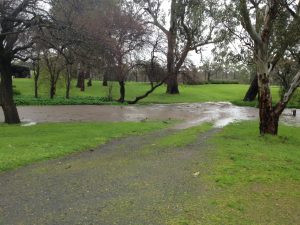 Looking down to Ding’s Block Shiraz you can see more of it! There is a track there somewhere. 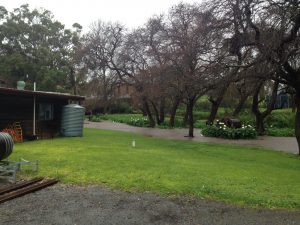 That’s the old almond winnower surrounded by the lilies and yes, more of the watery stuff. The floods do come through quite quickly – we find that within about a half an hour the water subsides a fair bit. It is pretty impressive while it lasts though. We once had the bank manager visit for a meeting just as the creek was flooding over the red gum bridge which leads to the house. We had to lob him a pair of wellies over the raging torrents so he could make it to the house without getting wet feet. If I’d been thinking I would have charged him for the service….. 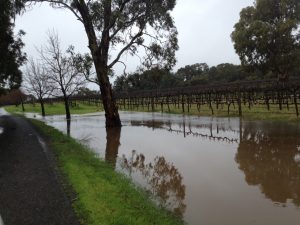 And finally you can see halfway down the drive way – Ian said the road was covered for about half an hour. I’ve never seen it that high. Great for the aquifer, and the wood ducks have been as happy as Larry. Joch is getting a little edgy as there are plenty of jobs that need doing in the vineyard, but the soils are so waterlogged it is almost impossible to get out in the tractor. The forecast tomorrow is for yet more rain – there is a 90% chance that we will get 10-20mm. Reminds me of summer holidays in Cornwall about 35 years ago when we stayed in our tents for a fortnight as there was no let-up at all.