It was a big day yesterday, as 650 or so winemakers, grape growers and assorted hangers on flocked in their finest (some in their finest – some, Zar Brooks, in their beach shorts. And as a matter of fact, so was his brother, Ben Brooks) to the humungous marquee which was pitched at the back of Penny’s Hill. This day is always a good day. The food was great, the wines were great, the weather was great. Nairn Web, BoB winemaker was our carver for the day – we had excellent pork and chicken, which we all sensibly ate lots of, to fortify us for the long day ahead.

Merrick Watts was MC and he was great, although he may have been a little risque for some. The Colonnades Shopping Centre took a beating, that’s for sure! 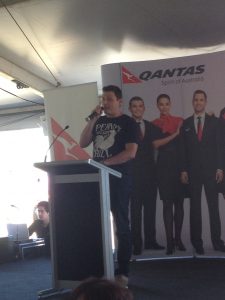 As you can see, Qantas came in as a sponsor of the day, which was a blessed relief for the girls wearing their highest heels – and there were a few – as there was a massive runway put in down the main aisle of the marquee, which made for much easier walking conditions. There were lots of male and female hosties dressed in their newest Qantas uniforms to escort us to our seats. I won the quickest tweeting award, so @timwildmanMW reckons, firing off the result of the Bushing trophy (Best Wine of Show – the 2012 Rosemount Estate District Release Cabernet Sauvignon) into the twittersphere almost simultaneously. Gee, I’m quick! 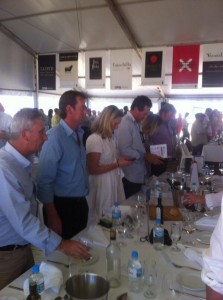 Well done Rosemount! Back to back bushing kings; great speech by Matt Koch. Nice effort by winemaker Andrew Lock drinking from the Bushing chalice (made by jeweller, metal smitherer and designer, Peter Coombs) and Randall Cummins. This photo was taken a little later in the day, as you might see. 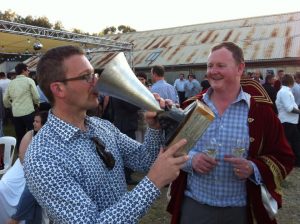 By the way this same wine won a trophy at the Melbourne Wine show a week earlier. Rosemount won 8 or 9 trophies this year at the McLaren Vale Wine Show, which is an amazing achievment, including their 2012 red blend, the Nursery project Graciano, Mourvedre Grenache. That Graciano is grown by none other that Joch Bosworth, by the way and it is a wonderful wine……:)

Being inventive types, some of the locals (Matt Koch, Bushing King on the left, Bozzie in the terry towelling, Nicole Thorpe back left and wine commentator Matt Skinner as aeroplane) used the Qantas table decorations to produce a live art installation. I have a feeling some of those Qantas thingies went missing over the course of the afternoon and evening…possibly to turn up as centre pieces on the tables of local winemakers and grape growers at a future date. I don’t know, but I’m just assuming. 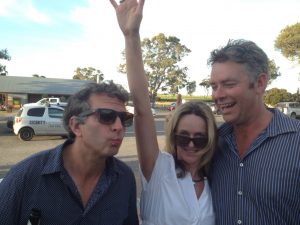 Later on the evening, it becomes very apparent that the time was nigh for certain little wine marketers to head home. By all accounts Jock Harvey from Chalk Hill Wines (right) stayed very late, resisting his mums loyal efforts to get him home safe and sound, and god knows what time Tim Wildman MW (left) departed, I hope he made it home safely to Port Willunga. Joch Bosworth arrived back at home at about 2am, with a couple of lost and disorientated revellers. Phew, all over for another year. A great day.

As a PS I forgot to add that food industry stalwart Pip Forrester (of Salopian Inn fame) was awarded the annual Trott Family Award for services to Viticulture… well, services to food and the region as it happens. Great result well done Pip. And thanks Tony (Pip’s partner) for making sure I got home safely.