October in McLaren Vale is jam-packed with activities. We have the McLaren Vale Wine Show, the Winemakers Bushing Lunch (where we find out the best wine of the show), and on top of all this, we’ve had a raft of visitors and a couple of trips away, which has pretty much filled the month to the gunnels. 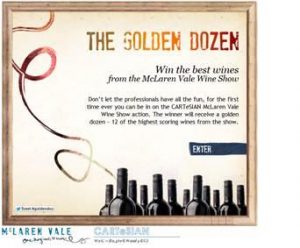 Tim Wildman MW’s James Busby tour bus rolled into town the week before Bushing, bringing a group of high-powered wine industry professionals from all over the world. This year there were 5 Masters of Wine (MW’s)  but despite their eminence, we still had them out catching squid in the early morning, followed by a tasting of the BoB wines, then a squid cook-up and culminating in a record group punt…..see below. 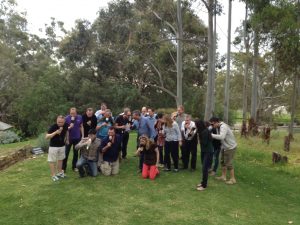 Punting is propelling oneself and one’s passengers languidly down the river in Cambridge in a flat -bottomed boat whilst wearing a straw boater and drinking Pimms, isn’t it? Not always the case,  so we discovered. The definition we explored – as defined by Sydney based wine journalist, Mike Bennie – is drinking wine out of the punt of the bottle. This practice allegedly developed as a response to having a bottle of wine, but no glasses. I understand this group punt at Battle of Bosworth stands as a record in the annals of punting – both the amount of people, and the number of MW’s. 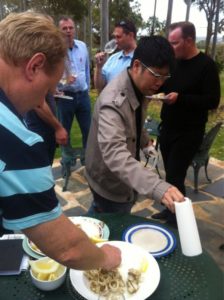 Judges for the 2012 MV wine show included Chair Tom Carson from Yabby Lake in the Mornington, Nick Ryan, Jim Chatto from the Hunter Valley and International Judge Edward Ragg from Beijing (@edwardragg for Twitter heads). The traditional ‘Meet the wine show judges’ pizza evening held at Primo Estate was once again a great success. This year we made the judges perform in a wine spitting contest. A necessary talent for a wine judge, but it’s quite a specialised spectator sport. Here’s Chair of Judges Tom Carson mixing it up – spitting AND twirling a tin tray…. 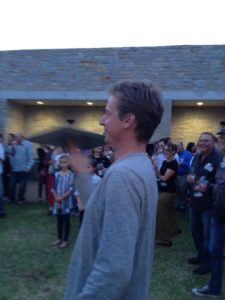 The Bushing lunch is a intimate lunch for  600 of Mclaren Vale’s wine growing and making community and is ALWAYS heaps of fun – dressing up , catching up with people who you have not seen for 12 months, waiting for the announcement of the Best Wine of the McLaren Vale Wine Show, perhaps drinking too much….This year it was at Penny’s Hill, in a marquee in the back paddock. An excellent venue, thanks PH and co for having us. 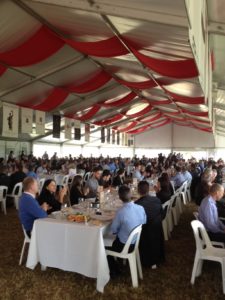 And the winner of the Bushing Award for Best Wine of Show 2012 was Rosemount Estates with their Nursery Project Mataro 2011, well done Matt Koch and Andrew Locke. Andrew Locke below looks justifiably smug (Rosemount not only won the top gong, but 8 trophies and 8 gold medals.) Hoorah for Rosemount! 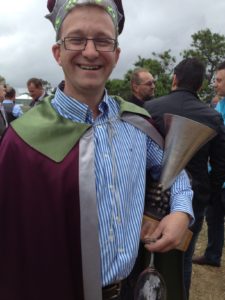 The very next day feeling a little worse for wear, Louise departed for Sydney to show the BoB and Spring Seed wines at a couple of tastings. First up was at the Sydney Fish markets for MUSSEL LOVE. Louise showed the new 2012 Spring Seed ‘Poppy’ Pinot Grigio, which matched really well with some of the delicious mussel dishes served up by Tom Kime, using Phil Lamb’s Spring Bay Mussels. Here’s Louise, Bodhi from Chapel Hill and Corrina from Oliver’s Taranga sporting splendid Mussel Love T-Shirts. 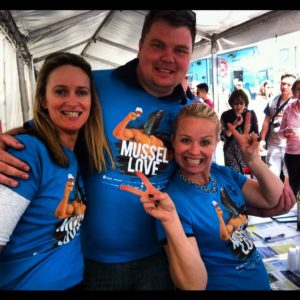 And then we got up the next day (after dining at the new Hemmes eating hall, Mr Wong – and seeing Hugh Jackman IN THE FLESH) and did it all again in the lane way behind Best Cellars and Love, Tilly Devine in East Sydney. Only this time, we were wearing yellow T-Shirts! 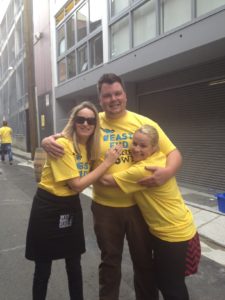 it was a great day, well done to Kooki etc and Radpublic (AKA Amanda James-Pritchard and Louise Radman) for putting the event together and Best Cellars and Love, Tilly Devine for hosting us. Next stop Christmas.