Well it’s nearly that time again. Vintage, or harvest, either term will do.  It’s so close we can almost hear the old UR harvester starting up. Once we see Ted out putting netting over the Hill and Orchard Chardonnay, and Ding’s block Shiraz, it really is just around the corner. The bird netting machine Ted uses puts nets out over three rows at once and protects the grapes from the beaks of the dreaded starlings.  A far better system than the one Joch remembers from about 10 + years ago, which involved manually stretching the nets over one row at a time, as well as some bending and stretching to tie the nets under the foliage. 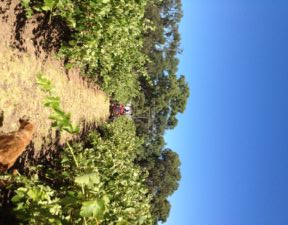 The end result – grapes protected from bird damage, but with an unwelcome and almost week long side effect of screaming hamstrings from all that bending and stretching  . 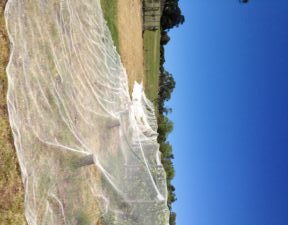 We’ve had a warm start to 2013, and as you can see above it’s looking pretty dry. I was digging through my photos and came upon this photo (below) of one of Graham’s Jersey cows from next door who broke through into our garden one day. As you can see it’s winter – look how green it is! The cow’s name is Naughty, which is very apt. Apparently as a calf she used to get out and head down to the golf course for some entertainment. Sounds a bit like a white Maremma dog we know… 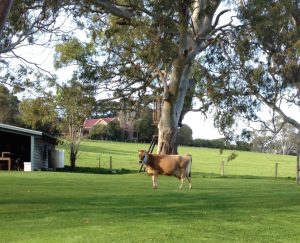 2013 will see Battle of Bosworth make wine on site, which is very exciting. We now are the proud owners of a large shed next door to the Orchard block Chardonnay,  in which Joch and our Kiwi import winemaker Nairn, will work their magic on our red grapes. Lots of work is being done in the shed – moving and installing big things like tanks, presses and fermenters. Lots of clanking sounds have been emanating from the shed, as well as some rich Anglo Saxon invective. Can’t muck about with heavy machinery without some swearing I suppose. That’s Nairn below in the main door of The Winery. Welcome aboard Nairn! 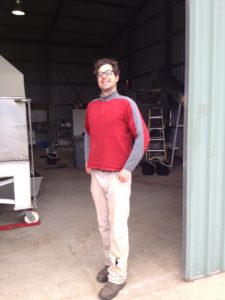 Nairn is not entirely new to us; he  used to sell Battle of Bosworth wines in the noughties at Best Cellars in East Sydney, where he worked with the guerilla of Australian wine writing, Mike Bennie. Nairn has a remarkable repertoire in desserts (that’s puddings, to you Poms!) most of which can strip the enamel off your teeth within seconds of ingestion. Always inventive though – apparently it’s a Kiwi thing, so I’m told.

The festive period saw my evil Uncle Handyside arrive in style in his  1978 Rolls Royce Silver Shadow. What a magnificent car. Not on the fuel efficiency front, I’ll grant you that, but there’s nothing like rolling up to lunch (to the lovely Currant Shed in McLaren Flat) in plush red leather seats. Marvellous stuff, thanks David. It adds a quiet sophistication to the cellar door as well I think. 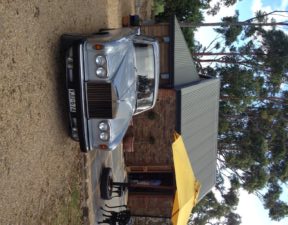 It would have been grand to have had the Roller for my quick dash down to the south east for the Coonawarra Cup at Penola race course recently. I went as guest of Sue Bell of Bellwether Wines, and drove down with Kerri Thompson of Wines by KT riding shotgun. We would have looked very grand  and not a little bit Mr Toad had we rolled up in the Shadow. Next time. By the way, the Coonawarra Cup was a belter of a day. As nice as McLaren Vale is, it’s great getting out to other regions to see how they do things. i put a few bets on the gee gees, and lost a little money. Thanks Sue! (Sue is far right of the piccie, Kerri is wearing her Grandmother Melva’s excellent hat and is poking through between Louise and Nick Stock .)

That’s all for now – next post will be on the flip side after vintage starts. I’m hoping that I will be back from my 4 nights in London before it all kicks off.