This is a very belated blog entry, seeing as our new UK importers Annual Tasting was weeks ago back on the 25th January 2012. I had dug out my winter clobber and gone over to pour BoB wines at Bibendum’s Annual Tasting, which was held near the Barbican Centre at The Brewery in the City of London. It was a massive event (2nd only in size to the London Wine Trade Fair, so I heard) and much wine was poured; The Puritan Shiraz seemed to carry the day in terms of popularity for BoB. I was a little out of training for the old late night carrying on but held up pretty well all things considered. 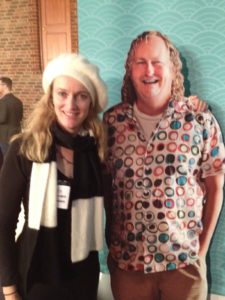 Chester Osborn from d’Arenberg was stationed just behind me at the tasting, and for once did not have so much to say. With vintage hot on our heels in McLaren Vale, Chester could not make it over to the tasting, but a very life-like cardboard cut-out was there on duty. Chester had his own Twitter hashtag #flatchester, which got a fair work out during the day. He was last seen heading off on the Tube to a party in Peckham, after post tasting tucker at next door Chiswick Dining Rooms. 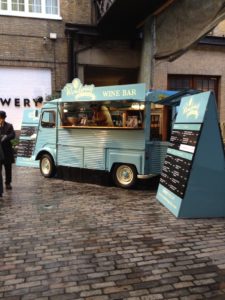 The Bibendum pop-up wine bar Citroen van was parked outside the Brewery as you came in. I did see someone trying to buy a packet of ciggies from it, which was unsuccessful;   in the summer months it is an up-market wine bar tending wines to outdoor functions (‘The Wondering Wine Company’). 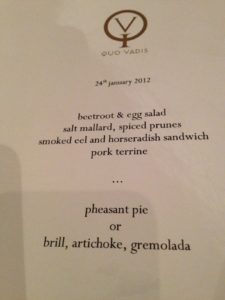 A few producers including Battle of Bosworth went to dinner with some press and restaurateurs at Quo Vadis private dining club in Soho a couple of nights before the Annual Tasting. The menu was brilliant and flooded me with a wave of nostalgia for the country of my birth (this feeling always passes very quickly if ever I end up reading a copy of The Daily Mail during a stay in the UK) – eel, mallard and pheasant. Terrific food, thanks Chef;  Bibendum’s  Willie Lebus (left) pays his respect. 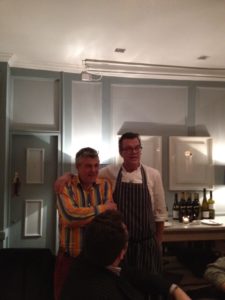 Before dinner I was ambushed somewhat by Lucy Shaw from The Drinks Business who interviewed me about the name behind our wines (see https://www.battleofbosworth.com.au/news/videos/). It is likely that I  would have been more to the point with just the one glass of fizz beforehand. 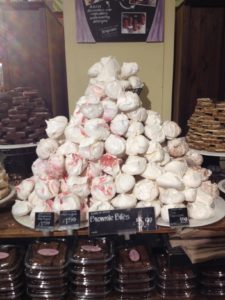 A quick tasting is a good tasting, so they say, and I think this works for a trip too. I was only in London for 4 nights before skipping out of town to head home to tag team with Joch and the kids for a very early start to vintage. We are both looking forward to having a great future with Bibendum; surely our inflated dollar and  the mining boom can’t last for ever?? The final (unrelated) photo above is the meringue display at Wholefoods Markets on Kensington High Street. You don’t see a stack like that in Willunga too often….