Battle of Bosworth and Spring Seed Wines trekked down to the Adelaide Convention Centre the weekend just gone, for the 2nd Cellar Door Wine Festival. Though our table was far less fortuitously positioned this year as compared to last, hidden as we were behind a wall in the back blocks near the storage area, we still managed to have a successful and amusing few days.

We had lots of visits from people who are on our mailing list, which was great; nice to know my emails aren’t sent straight to the trash file, although with my WordPress website, I know exactly who has and who has not opened their mail…Big Sister is watching you. This is Tash Stoodley below left (and friend). She works for the Adelaide Hills Wine region, which incidentally had a far superior location to us in the hall this year. Can’t be too jealous, they had a shocker of a spot last year. She isn’t on my mailing list, but she should be. 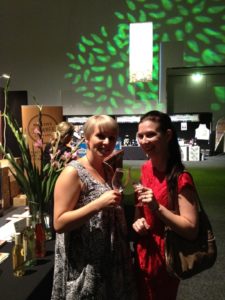 The look and feel of the big hall was excellent as per last year, although the large blue balls (!) you see suspended from the ceiling (which changed colour throughout the day) still stirred up the same vaguely  unsettled feelings  as last year. 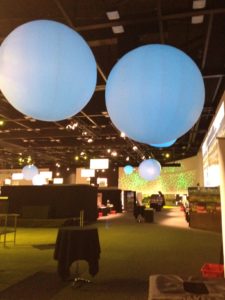 An event like this is a great opportunity to catch up with industry chums and share gossip (intelligence gathering we like to think of it), and so it was great to see former PR darling of Constellation wines, Rebecca Hopkins (see below with LHS), who was back from the US for her father’s 60th birthday celebrations. Brian Miller was about the place too; I am never entirely sure what Brian actually does, or for whom but he does it intelligently and well. Nice to see you Brian! Tom Keelan from The Pawn Wines was up to his usual tricks over the Adelaide Hills region; whenever we saw people over in our neck of the woods with the Pawn stickers on, we stuck lots of our soursob stickers over his Pawn stickers and sent them back to flaunt the defiled stickers in front of him. Small things and small minds, I know, but we enjoyed the sport. 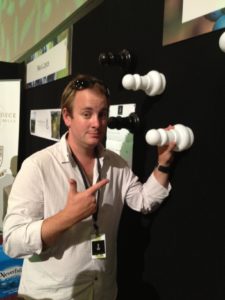 And while we were in Adelaide, cellar door was manned by none other than Grant Tindale, legendary Sunday cellar door man at Penny’s Hill and Mr Riggs cellars. (His wife also cuts my hair) He did me a huge favour stepping in to the breach as Joch was frantically picking grapes. And what a day he had, narrowly missing the all -time cellar door sales record. We thank you Grant, but what’s with the toaster on the bench? (See below) 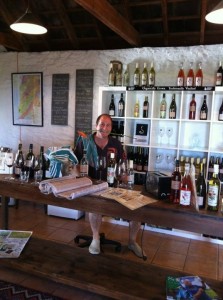 We sold a bit of wine and covered our costs (just about) and met lots of people who were very interested in our wine which always makes these events worthwhile. I have lots more people now to add to the mailing list, all ready for the March newsletter.