Well, vintage – or harvest – is finally over for 2013. The guys picked the Petit Verdot up on the hill on a balmy April day, and that was that. I think if you asked the key protagonists in the cellar to come up with words which they associate with vintage 2013, once you climbed over the expletives, you might get: hard and fast, and just a little bit hot. I believe that the saying of vintage came from Joch ‘there’s been a slight change of plan’ ….but that’s vintage for you. 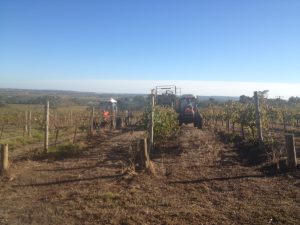 We did have a fair bit of help, mind you, over and above our stalwart winery operators. We’d already had Florent over from our NSW distributors, World Wine Estates. He put in some solid hours on a couple of reasonably hot days. James Brandwood then showed up, also from NSW, ostensibly for dinner. He was of course dragged in to do some pump overs in the evening. What did he think he was going to do, sit around drinking cocktails? He seemed quite chipper doing his work though. 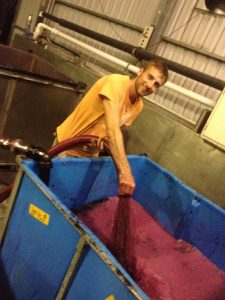 Since the end of vintage we’ve had fair opening rains which has been a welcome break after a dry summer – I think we had about 50 mm. The creek filled nicely with rain, enough to warrant the wellies coming out and some serious paddling from the junior members of the team. 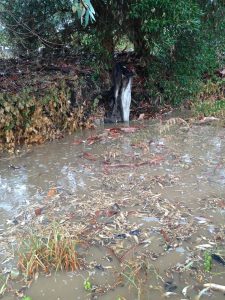 Louise has been out and about the country doing tastings and lunches, mainly for the fairer sex, as it happens. First up was a lunch at Sue Bell’s magnificent Glen Roy Shearing Shed and winery down in the Coonawarra. ‘Sips in the Sticks’ was the final event of the inaugural Adelaide Food and Wine Festival, and was a cracker.

All lady winemakers had to provide dessert for the guests, and they were all judged by head of the local CWA (Country Women’s Association) Kate Spicer and Nick Ryan, wine writer and journalist for the Sunday Mail. Judging was intense and professional. That’s my pavlova in the bottom left hand corner of the photo. 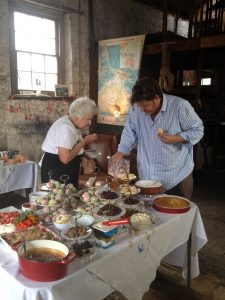 Louise came out of the ring early, pretty confident if truth be told, informing all and sundry via Twitter that her pavlova was going to blow the competition out of the water. Ah, hubris hubris.  The pavlova was dismissed by the inimitable Kate Spicer as ‘grainy’ (oh the shame) and the winner with her grandmother’s lemon delicious recipe was Corrina Wright from Oliver’s Taranga. Kerri Thompson from Wines by KT was disqualified with her gem cakes – not a dessert, KT. 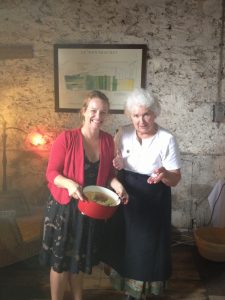 This was a terrific event. The rest of the delicious food was prepared by Kate and the Penola CWA and Sue’s venue was wonderful. Thanks Sue for having us. Next up was Women Wine and Shoes up in Brisbane and in Melbourne, and though very different beasts, all events were belters. Thanks go to Jane and Sue from the Fabulous Ladies Wine Society for putting on two such well organised and entertaining nights. 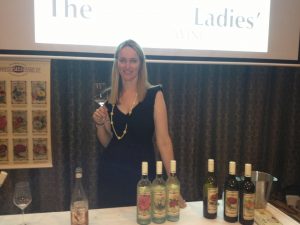 Joch showed off our new Shiraz at the launch of the 2011 Scarce Earth Single vineyard Shiraz last Saturday at the Visitor Centre, but did not manage to get any photos. I think one of our number one fans Andrew Driscoll took a few – any chance you can send some on Andrew?! The two Battle of Bosworth 2011 Single Vineyard Shiraz – ‘Chanticleer’ and ‘Braden’s’ will be available for tasting and sale in cellar door soon. Finally, a silly photo of Joch in a little mini, taken by young Charlie Seppelt from Yangarra. Super Mario? Or Spanish Conquistador? Either or, that mo is going very soon. 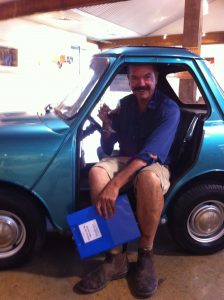