It seems an aeon ago now since the annual coming together of winemakers, vignerons, and all wine associated folk in between that is the Winemakers Lunch. This year we were in a new venue, the old Tatachilla Winery on Tatachilla Road, McLaren Vale. In the early part of the last century Tatachilla Winery was the largest working winery in the southern hemisphere. It was a gravity operated winery, hence the split level luncheon we found ourselves at on the last Friday of October. 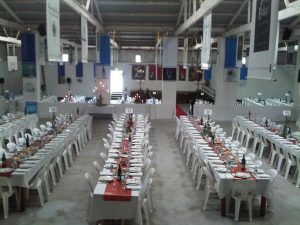 The old winery looked magnificent, alll decked out in a vaguely Elizabethan theme, which some people took to heart more than others. Justin Lane from Alpha Box and Dice went all out (see below), which provided an amusing visual gag for all, and raked up fond memories of Blackadder for me. 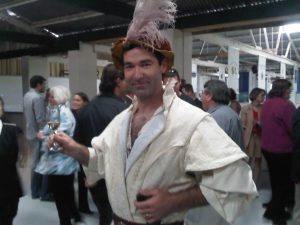 The main purpose of the Winemakers Lunch (apart from being a great forum for a catch up) is to announce the Bushing King or Queen, that is, the maker of the Best Wine of Show from the McLaren Vale Wine Show. This year for the very first time, Battle of Bosworth was in the running for this award, as our 2010 Cabernet Sauvignon had been awarded Gold and trophy for the best McLaren Vale Cabernet Sauvignon. The photo below was from the MV awards dinner held the previous week at Hardy’s old Barrel shed. 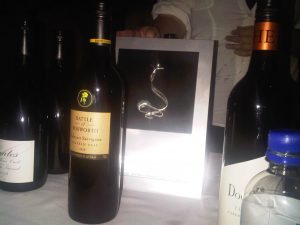 The CS is looking particularly pleased with itself with its Peter Coombs designed trophy, although Louise’s Blackberry camera leaves a lot to be desired. After tasting all the trophy winning wines on the awards dinner night, my thoughts were that a SC Pannell wine might ‘get up’, and I think a lot of other people thought the same. In fact Steve’s 2010 Touriga Tempranillo was announced Bushing Wine, which confirmed everyone’s thoughts. It is a lovely wine, and thoroughly deserved the gong. Steve and Fiona looked magnificent in their purple robes. The outgoing kings were Michael Fragos and Bryn Richards from Chapel Hill and I managed to catch a shot of Michael is his robes just before being stripped of his title. He would not put his crown on  for me though, something to do with hair and product? 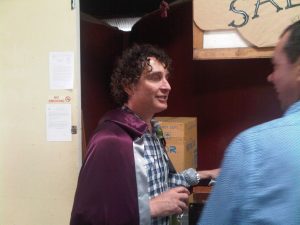 A big part of the lunch is the winemakers parade at the beginning, when with cajoling and cattle prods, the winemakers are made to parade up to the front through the seated crowd and stand and be gawked at. This years commentary was given by Mike Brown from Gemtree Vineyards and our very own Joch Bosworth. It seemed there were less cheeky asides than in previous years when Jock Harvey from Chalk Hill was the MC….Anyhow, with Joch being associate MC, this gave Louise the opportunity to pretend to be a winemaker, and wear the winemaker’s medallion and mince in to the front… 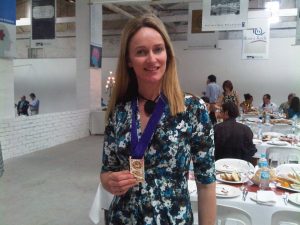 All in all a very successful lunch. Food by the Victory hotel was excellent. I believe there were a few injuries sustained later on due to uneven floors and over zealous greetings, but nothing that 7 weeks in plaster and a metal rod won’t sort out (@waywoodwines bad luck Lisa). Well done Lizzy and team from MVGWT (McLaren Vale Grape Wine and Tourism Association) for organising an excellent lunch, and well done SC Pannell Bushing King.