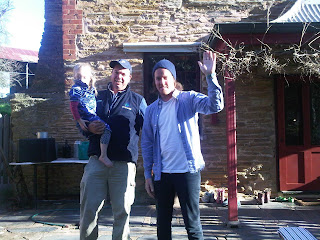 The week ahead is looking like doing some tasting notes (Joch I need some tasting feedback from you please for the 2009 Shiraz, 2009 Cabernet Sauvignon and 2009 Spring Seed Shiraz), bottle shots, trying to finalise the Battle of Bosworth brochure which I have been working on for light years, as well as fitting in a trip to the cinema to see ‘Toy Story 3’ in 3 D with the junior Bosworths.

On Sunday afternoon in the midst of all this planning we had a visitor. A VIP in fact – Joel Amos, the architect of the original Battle of Bosworth website ,a Willunga boy by birth and now based in Sydney working in the music industry. Before getting into the muso industy he worked at 2 of the best wine stores in the country, East End Cellars in Adelaide and Best Cellars on Crown Street in Sydney.

I met Joel as a very young man at Penny’s Hill in the early part of the noughties when Joel was fresh out of a wine marketing degree at Adelaide Uni. I think I took over his desk actually at Penny’s Hill, so it is a miracle he is still talking to me. Anyhow, Joel has just returned from a European eating tour of the top restaurants on the San Pellegrino list of 2010. Sounded amazing. Great to see you Joel. xxxx