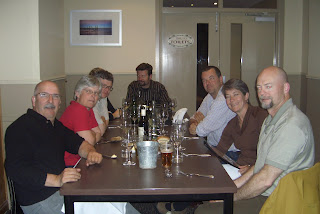 It has been a busy April at Battle of Bosworth and Spring Seed Wines with visitors from all over the globe dropping by, including Louise’s mother over from the UK for Peggy’s 3rd birthday on the 24th (Peggy was very nearly called Digger). We had the 7-strong team from Tastevin, who are our distributors in Idaho over for a visit and tasting on the 27th April lead by Steve Thies and his wife Melissa. 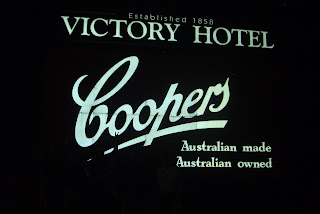 It was getting a little dark (and cold by Willunga standards) by the time they found us on Gaffney Road, so we retired to the welcoming Victory Hotel to taste some Spring Seed and Battle of Bosworth wines, have some tucker, and take a peek at some 2010 wines from tank. A mid week dinner at the Victory is a rare occurrence for the BoB and SS team so sales and marketing may have over-indulged a little, but she is going to make the royal assumption that everyone else enjoyed themselves as much as she did. Boris the Golden Retriever certainly enjoyed Bob’s attentions.

We hope we inspired Tastevin to fly the Spring Seed flag when they get back to Idaho. By the way, a little known fact: Sun Valley, Idaho, one of the oldest ski resorts in North America sported the world’s first ever chairlift.