Well, shed building continues apace, with the newest part of the winery going up very quickly – once we had got over the planning application hurdles. Nairn has filled the new space already, mentally. 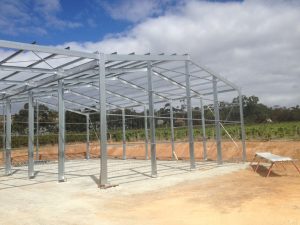 Vintage is sort of happening, with our whites safely in. We had a biggish rain a couple of weeks ago (about 42mm) which stalled the ripening of the reds, but this next week should see some serious action. The boys (which includes new vintage recruits James and Josh) have already been busy. We picked some red fronti (AKA Muscat a Petit Grains) early and here you can see it below bubbling away fermenting. 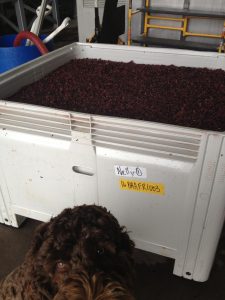 Once ferment has finished , the grapes are pressed off and sent to barrel, or in this case, tank. You can see the job being done manually here. Great shot thanks Josh. It looks like Josh has taken on the mantel previously worn by Spencer in the pants off method of winemaking. 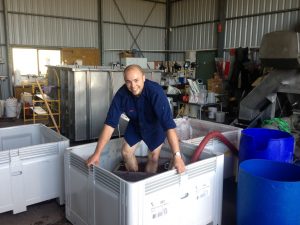 Vintage, or harvest really is the make or break time of the year for us – and involves a lot of long hours, early starts, late finishes, occasional stuff –ups and hopefully enough laughs to keep the momentum going and everyone chipper. Nairn has obviously got into the spirit of things here with his crown bowling hat. I’m not sure about the stick though. 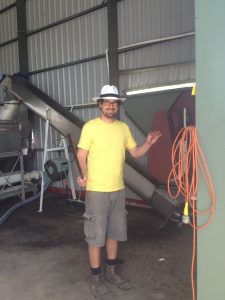 Some days are diamonds but some ain’t (see above re stuff-ups). A whisky was required after this day of mechanical and electrical malfunctions. Woof, Lucy? 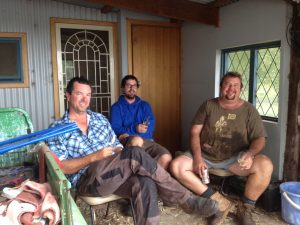 Joch ordered some new bins from the West which have been nicely branded. It’s touches like these which us marketers in the office smile upon. I must check to see if these are picking or ferment bins – I have a feeling they are the former. It’s probably time that I actually did a vintage so I can be a little more specific about the whole process, but I am not sure if I would be welcome down there. 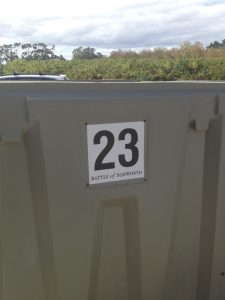 I have tried to track down and photograph newest recruit James, but he’s like a shy woodland animal and darts away and hides under a tank every time I approach with my iPhone. The only thing I could get a shot of was his Suzuki Swift. He’s clearly got a sense of humour – check out the Confined Spaces hazard warning on the back. 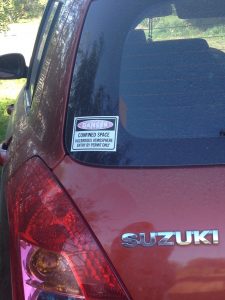 I mustn’t forget Darcy while I think of it. He’s been on secondment from his Uni course and has been out helping in the vineyard but still found time to help Josh do a little bit of Pinot sorting. See you in a month Darcy. 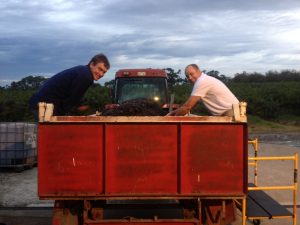 It’s not vintage if I don’t make a mention of what’s being drunk in the cellar after a long day. It seems that in Vintage 2014 #V14 there has been a paradigm shift away from stubbies to tinnies. Radical. Or convenience? 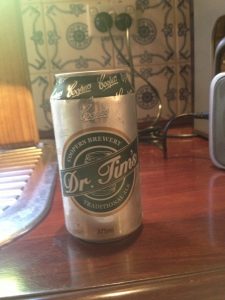 Vintage time generally means our social life gets put on hold. Friends and local winemaker (Inkwell Wines) Dudley Brown and grape scientist Irina Santiago put paid to this pattern last Sunday however after announcing via Facebook and email on the Thursday preceding that we were to turn up at 5pm on Sunday for a wedding. The bride arrived on a pallet via a forklift. Best entrance I have ever seen. 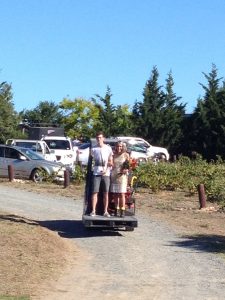 The bride and groom both wore their work boots, though I did note Irina had polished hers.

The dress code was loose – as you can see Bozzie came in work clothes. There were a few frocks and hats, and a lot of fun. The band was terrific and it was pretty hard to work out who had the best time – kids, dogs or adults. 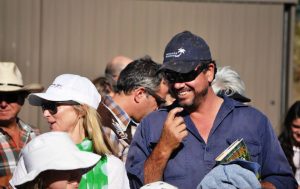 Since I started writing this blog post, I did another drive-by past the winery on the way to collect the kids, and saw the shed had become even more shed-like – the boys from Amace don’t muck about. There’ll be concrete poured before we know it. 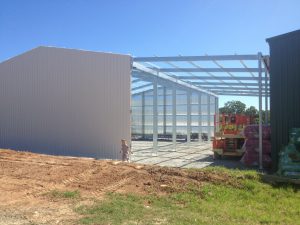 I expect the next post will see the guys in the winery a little bit more under pressure as the reds come in. 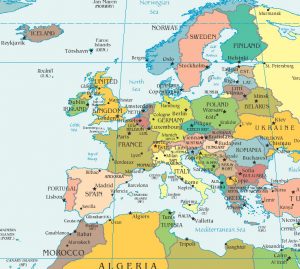 Never mind the production side of things, on the sales side, we have quietly been infiltrating northern Europe, in a small but perfectly formed way. Spring Seed Chardonnay will be available in stores in Sweden in June, and a little bit of Spring Seed Pinot Noir, SB/S and Shiraz is just about to leave these shores for Belgium. We have been in Norway for a few months now, and ditto Finland with the Spring Seed Chardonnay. There may also be a chance of Battle of Bosworth wines going into France, too. In another corner of the paddock, Battle of Bosworth and Spring Seed has been in Japan for a few months now, and seems to be going well. I can smell a world tour in July around the corner. For me. OK, until next time.