Well it’s finished. All the grapes are in, ferments are finished and everything has been pressed off, and wines have been ‘put to bed’ ie they are safely in barrel, or tank, or about to be bottled. The guys had a big night in Adelaide to celebrate the end of Vintage 2014. Thanks Chook the local people mover for doing pick up and delivery duties. Best on ground? One of the younger members of the team, Josh put in a solid effort and came out ahead, even though from the picture you might think that an espresso martini in the hands of Spencer would be a dead cert win. Not so. 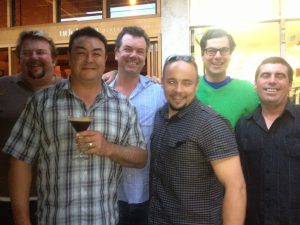 Speaking of bottling, the days and nights of waiting are over; 2014 ‘Sweet Pea’ Moscato is available, as is the brand new Spring Seed ‘Morning Bride’ Rose 2014 (pictured) and the 2014 ‘Puritan Shiraz,  the 2014 ‘Poppy’ Pinot Grigio and the new vintage of our ‘flagship’ red, the ‘Best of Vintage’ 2011 Cab/ Shiraz/ Petit Verdot. All  now online …. 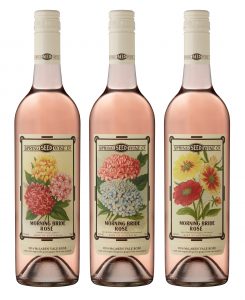 Taking part is fun, but winning sometimes leaves a better taste…Oscar the fluffy hound came home from the Mt Barker Show’s family pet show with the Blue Ribbon in the Dog (Large) class! And won $4.00, what a result. Seen here with Peggy. 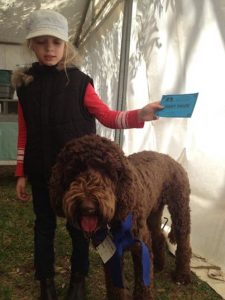 Roxie and fiancé Brenton brought home the bacon, or should that be the pastrami when they went into a draw for a trip to New York after getting a new set of tyres. Five nights in New York with all accommodation paid for PLUS some spending money. Well done Roxie and BR hope you find someone to look after the kids…also news off the press there’s to be wedding at the end of the year! Congratulations both of you, Bozzie is so proud – a two for one deal; engagement party and wedding rolled into one :) 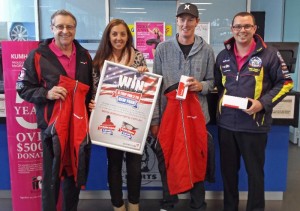 Great news for Nairn our winemaker’s wife, Luka. Belgian born and newly minted Australian citizen, Luka has just won a place on the Australian  indoor volleyball team. The ink had barely time to dry on her certificate of Australian-ness before she got the call up. A trial in Melbourne and then the official nod, and she’s off to Vietnam for two weeks to play for the Aussie team. Well done Luka. Here she is with proper winery dog, Lucy who keeps Nairn company down in the shed. 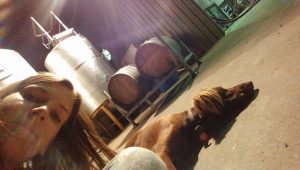 Talking of dogs, here’s the newest member of the team, Connie the standard Dachshund who came to us all the way from Port Augusta. She is everything Oscar is not; height-challenged, shiny-coated, quick-witted, bossy and full of energy. Oscar doesn’t know what has hit him. He can’t believe Connie is up at 6am wanting to go for a walk. The chooks are on their guard too, as Connie is not averse to trying to take a chunk out of whatever part comes to mouth as she passes by at speed. At least Connie’s presence seems to keep them from defecating on the back step, which has made a significant improvement to our household hygiene. 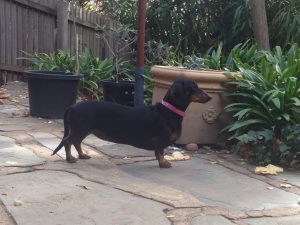 I loaded up the wagon in mid April and went off down to the South East for the sequel to ‘Sips in the Sticks’, a long lunch at Sue Bell’s historic Glen Roy shearing shed and home of her Bellwether Wines. I picked up Bec Willson from Bremerton Wines in Langhorne Creek on the way, crossed the mighty Murray River on the Wellington Ferry and then collected the lovely Kerri Thompson of Wines by KT at the Tailem Bend turnoff. Waffles in Coonalpyn fortified us for the rest of the run down to Coonawarra. Waffles, in Coonalpyn? Whatever next?

The lunch was part of the Adelaide Food and Wine Festival, and it was terrific. Catering was by the local Afghan community, who are recent migrants to the area, and the lady winemakers (which included me) who had to bring a dessert which reflected our cultural heritage. Our desserts were rather nerve-wrackingly up for judging later. Senator Penny Wong spoke (and was one of the judges) and MC was wine scribe Max Allen. Minister for Tourism Leon Bignell MP was one of the judges too.  The other lady you can see below is Kate Spencer, head of the Penola chapter of the CWA (Country Women’s Association) and time-served produce judge at local shows. She strikes terror into the heart of every winemaker/ dessert maker, as she never sugar-coats her comments about our entries, and we are sensitive folk at heart. 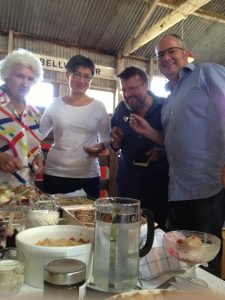 Needless to say my lovely rhubarb and apple crumble was unplaced, although Leon Bignell’s son Connor came up later and said mine was the tastiest pudding there. A nice consolation prize. Talking of lunches, as part of Aussie Wine Month we joined forces with Fino in Willunga for a 5 course lunch where we bought out some back vintage Bozzie wines. This was a fantastic day, thanks Sharon and David for having us, and for everyone for coming. 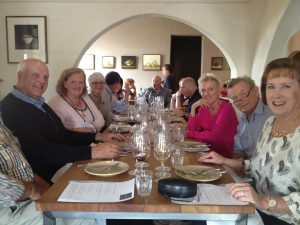 Some of the wine Joch pulled from the cellar looked great – see the 2002 Cabernet (our second vintage) and look evern further to the right, the white label with the funeral lily on it? That’s the Battle of Bosworth prototype, the magnificent 1996 ‘Bozzy Rouge’. thanks to one of our very good SA customers Michael for bringing a bottle from his collection to share with us. His was in the burgundy bottle, which Joch tells me means it was first down the bottling line and before the hand-bottling team (roll call included Jock Harvey from Chalk Hill Wines, Michael Paxton from Paxton Wines and Justin McNamee from Samuel’s Gorge) had drunk too much beer! 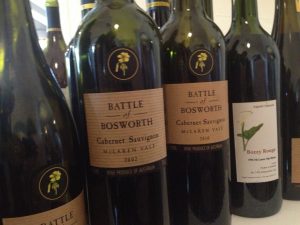 Tim Wildman MW’s James Busby Tour rolled into town with a heavy-hitting collection of wine professionals from far flung places – the USA, Canada, the UK, China and Hong Kong. They visited our cellar cellar door, met Connie and Oscar and had some scones, jam and cream and some Spring Seed SBS as we watched the sun go down. Then someone played a rock ballad and the candles came out… 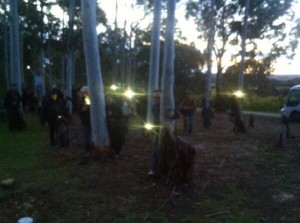 In an ideal world, we should have had some squid, instead of scones, but when the crew went out at dawn earlier that day, the pickings were slim. I think they only caught 4 squid between 4 boats which was disappointing, and meant of course I had to get my baking hat on, pronto. Here they are at the old Pt Willunga jetty celebrating…no squid! 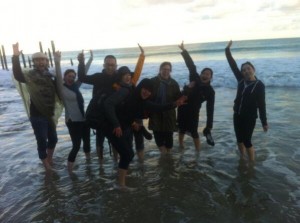 It’s well and truly Autumn in the vineyards, so pruning is not too far away. Joch’s dad has been putting in the cover crops, and these are going well after our good opening season rains.

This shot is courtesy of one of the group from Yelp Adelaide,Joanne Ferguson from What’s on the List, who came up and visited us as part of the #yelpWillungaWonders tour, aboard the Good Ship Chook’s People Mover, and had a tasting from some of the barrels from 2014. The guys and gals all learned the difference between American oak and French oak as well as picking up a few other winemaking tips. There was a lot of post trip tweeting and blogging which was great. 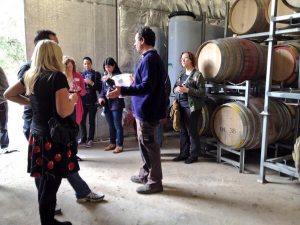 Well, that’s all for now folks, roll on winter and some more rain. See you in cellar door soon. Cheers.