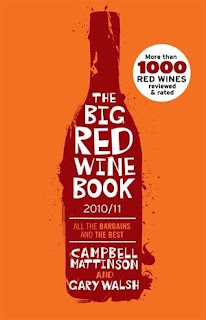 As modest as I like to think we are (Joch more so than I) it is always nice to receive some words of praise. So I was particularly pleased to lay my sweaty little mitts on a copy of Campbell Mattinson and Gary Walsh’s Big Red Wine Book 2010/ 2011 (Thanks Rebecca Coombs from Wirra for collecting it, I’ll be round shortly with a cheque)

Battle of Bosworth Wines are very well represented in the book, which is nice. The 2007 White Boar (our homage to Amarone) is ‘impressive stuff’ and gets 93 points, the 2008 Cabernet Sauvignon gets 93 points also, and GW and CM generously comment that we have ‘nailed this release’ and the 2008 Shiraz Viognier weighs in at 92 points as a ‘velvet glove kind of wine ……with lovely fragrance.’

How clever you are Bozzie, even if you have spent the last 2 weeks drinking Campari and sodas, surfing, boogie boarding and generally doing bugger all on some tropical island.