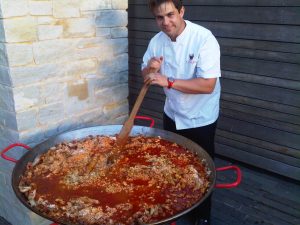 Chief Judge is Tom Carson from Yabby Lake. Also in town to cast their eyes over our fine wines are Louise Radman, Nick Ryan, Sue Hodder from Wynns and Jane Faulkner who writes for the Age. The good folk of the Vale take the opportunity to subject the judges to a ritual humiliation by forcing them to make pizzas (in the wonderful pizza oven at Primo Estate) and then judging them on their efforts. In some small way it allows us, the wine show judgees, to feel big and powerful, when we know that the wine judges are likely not to recognize the greatness of our favourite Shiraz or Cabernet at the show, and leave us broken-hearted. (Below panel 1 lining up, Jane Faulkner to the far left chatting to someone, Tom Carson having a quick shut-eye, Lisa P-B MW, Justin Lane from Alpha Box and Dice and James Rouse from Wirra. Above an ENORMOUS and delicious paella) 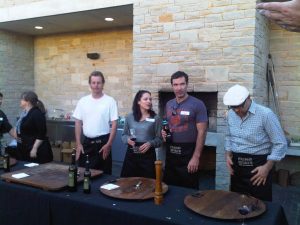 MC for the night was Zar Brooks from Dandelion Vineyards, who rose to new heights this year in his role, quoting tracts of Shelley to the assembled throng, who were keenly awaiting the result of the pizza contest. We tolerated his erudite performance however, which he punctuated by throwing a knife into the ground, narrowly missing someones kid who was running by. He didn’t miss a beat of course. (Below left Andrew Locke chair of the MV wine show, and Zar) 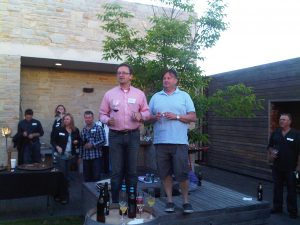 Winner of the pizza making contest was the divine Mistress of Wine Ms Louise Radman, below. 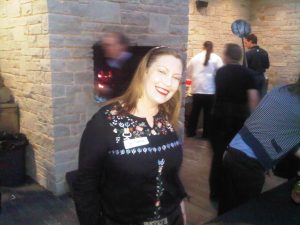 I think this is the third year of this family friendly event, and is a credit to all involved; the organising committee, the judges good humoured involvement and us, the punters, for coming along on a school night. The kids were allowed to have a crack at making their own pizza once the main event was over as well. See young Bosworth (below) pretty pleased with her efforts. 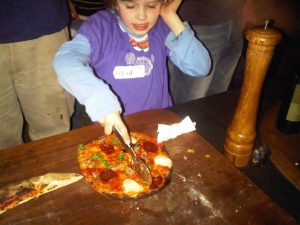 Thanks for having us Primo Estate. PS The Bellinis were excellent by the way, as was that giant paella. Now, wine show judges, I want a gold medal for one of my wines!