It is always nice to get a gong or even two, and even nicer to go to a good old black tie presentation dinner, especially when it is held in the bowels of the Intercontinental Hotel (Formerly the Hyatt) in Adelaide. There was a lovely lady perched in a giant plastic champagne glass in the foyer, waiting to quench our thirst with the (at that time unknown) winner of the sparkling category. Nice work if you can get it. We did try and encourage the lovely Carmen Maerschel from Mitolo to hop into it later, but she cried off saying her red dress was too tight.

I was sitting with Corrina and Brioni from Oliver’s Taranga whose 2008 OT Shiraz won the Consumer Judges Award in the Shiraz category, as well as Paul T Smith and crew from Wirra Wirra whose 12th man Chardonnay was the Wine of the Year in the Consumer Judges section. Our section of the room got quite noisy as the evening wore on the and awards were announced.  Tom Keelan from the Pawn Wine Co was just behind us too, and his Tempranillo won the professional judges award in the Other Red category. More unseemly and immodest whooping.

The SA Wine of the Year Awards are unique in having a panel of consumer judges who make their selections from initial judging done by a panel of professional judges. In this case our Battle of Bosworth 2010 ‘Clarence’ won the Certified Organic award in both the consumer AND professional judges categories, which is terrific. Two more things to hang on the wall of the trophy room (in our case the new outside lavatory at cellar door.) 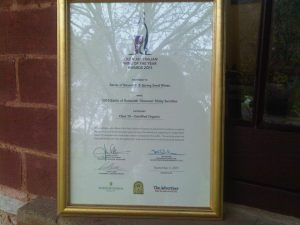 Thanks to the Interncontinental Hotel for a good night, although there would be still a few people this morning shaking their heads at the vision of Adelaide’s version of the Pussy Cat Dolls who were the entertainment for the night.  Joch would definately enjoyed their performance more than I did.