Battle of Bosworth had a great showing at the annual SA Wine of the Year Awards winning both the consumer and professional judges’ awards in the newly created certified organic/ biodynamic category.

Given that Joch was in the US selling the Spring Seed wines, it was up to Louise to don the frock and fake tan and head to the Intercontinental Hotel on Friday 10th September and soak up the glory. The photo attached was taken on my Blackberry by Froilan from Chace Agencies, our SA distributors. The quality is not great, but you get the idea. 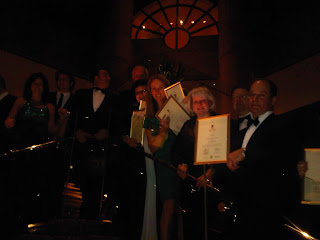 The awards are in their 20th+ year and recognize the very best wines produced in South Australia. The awards are judged by an independent panel of the state’s leading wine judges. The awards are unique in having a separate set of amateur consumer judges who taste a selection of the best wines first chosen by the professional judges from more than 1000 entries.

The BoB 2010 Preservative Free Shiraz won the Professional judges award, and the 2009 Battle of Bosworth Cabernet Sauvignon the consumer award. Both wines were written up in the Advertiser by wine journo Tony Love, who saw The PF Shiraz as being ‘worth exploring for being a good McLaren Vale red as much as for its organic and preservative-free status.’

On the Cabernet; ‘What a double for the creative McLaren Vale crew behind this fruit-driven cabernet with classic cassis and a faint hint of mint. The consumers were entranced by their selection, which showed the best organic wines are going great guns.’