For those of you familiar with this 1995 movie, I would like to say I don’t in any way see myself as as the enigmatic female gunslinger played by Sharon Stone, nor can Joch Bosworth from any angle be viewed as the evil and sadistic Gene Hackman character. Actually you might want to ask Ian, Spencer, Aurelien and James about that on the QT. Here’s Ian and Spencer taken before the flood. 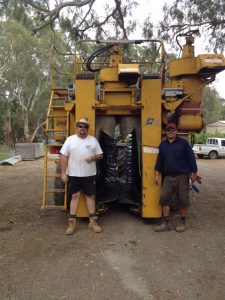 I think I just wanted to emphasise how quickly vintage 2015 seems to have come and almost gone in the blink of an eye. Fingers crossed, no-one has passed away during the harvest either, although a tractor and trailer full of grapes did take a bit of a tumble off the grape intake ramp and nearly met their maker….This bloke in his pants, below, was not the culprit however. This is Aurelien Goussé our French vintage worker, who loves to clean and usually wears impeccably stylish French wellies. Nice work digging out the skins there Aurelien. 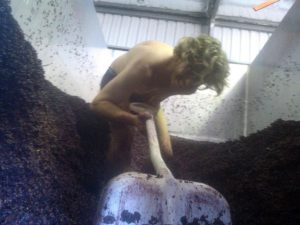 As well as bringing continental wellington boot flair (and he imports wine from the Loire as well), Aurelien also has a very talented wife, Sarah who just recently had a sold out run at the Adelaide Fringe Festival with her show ‘The Misadventures of Miss Bouzy Rouge’. I like the sound of this show (though sadly didn’t get to see it) as little known fact #34, Joch’s first foray into bottled wine production was a 1996 Shiraz called ‘Bozzy Rouge’. Joch has never been known to wear curlers in his hair though. 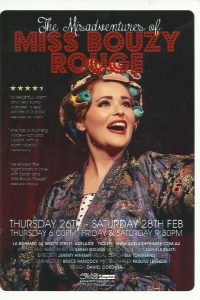 We had some female input into the winery this year, which was very welcome; here’s the lovely Emma, who usually works out of the office, in her work ‘duds’ (clothes) doing some evening some evening pumpovers for us. That smile would surely have added extra flavour to the ferment. Cheers Emma! 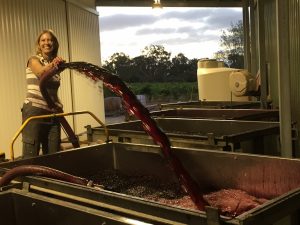 Young Clint Ledgard came in and helped with some picking as well. Here he is discussing picking conditions on the Road Shiraz (on the right hand side of the driveway coming up to cellar door) with Celia, the eldest Bosworth. He didn’t realise the danger he was in. Spot the angry Dachshund on Celia’s lap. Clint just managed to get away with his hand intact. 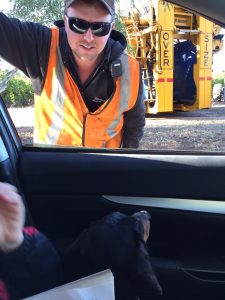 Ian Adam, doyen of cellar door, vineyard, winery and his own wine brand, Dabblebrook, might well have taken ‘the’ shot of vintage 2015 with this ‘selfie’ of him on top of the trusty old UR harvester picking the winery block. We have entered him into Wine Business Magazine’s vintage 2015 selfie contest, and we are eagerly awaiting the results. 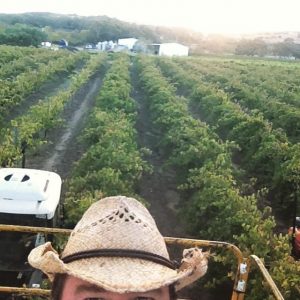 Here’s the view looking north from the cellar door as the guys pick the Hill Shiraz. Great view on a beautiful day. Another Ian Adam photo special. The character you can see there is Joch, although it could be Spencer too. Now where are my reading glasses? 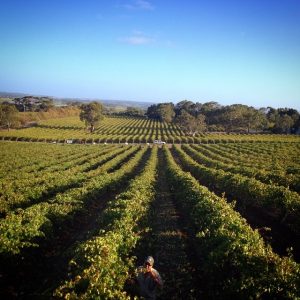 Roxie and I managed to get into the city during February for the annual Cellar Door festival, and spent a Friday night and weekend on the stand showing wines to new customers and old. The kids came in and helped too, if you call pushing each other round on a sack trolley help. The team from ‘Plonk’ were there filming for their comedy TV show (a show about making a wine show). The front man is the Chaser’s Chris Taylor, and here is is trying to get me to take him on as the Battle of Bosworth brand ambassador. I am supposed to be unsmiling and trying to move him on. Not planning on giving up me day job any time soon. 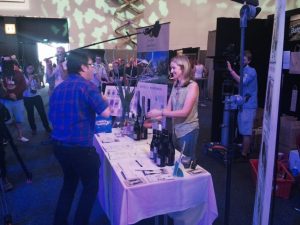 In terms of vintage 2015, Bozzie says the whites are looking outstanding and the reds are looking super-bright and varietal. While crops are down on previous years (which is what we were expecting) flavours most definately are not. Look out for wines from 2015 in the next couple of years. 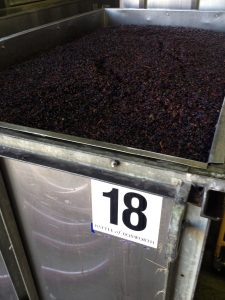 Well that’s about it. We only have the Petit Verdot left to pick plus a couple of bits of Cabernet, then that will be it for #Vintage2015. More news when the reds are all put to bed and the 2015 whites (and eagerly awaited Rose) are heading into bottle.