I had to write a news round up for our wine club members (have a look at the benefits of joining such a fine wine club here) and so rather than use it just once, I thought I would double up and post it in various places. There is some news from the vineyards and winery, some of it old news, other bits new-ish. The main news is that ‘it’ remembered how to rain, for which we are eternally grateful.

We opened our new cellar door on Springs Road on the 18th December 2018. It was a protracted labour– Louise and kids and dogs were stranded on the island courtesy of the storms we had in mid-December. The wine was stranded too. We had lots of Ikea furniture to put together. We did it and opened only 2 weeks later than we planned. Thanks to Peggy Bosworth (aged 11 at the time) for putting together 3 Ikea outdoor settings and Jane Arnold, cellar door supremo, for keep her (and our) cool. Great effort. Open for tasting now. (winter hours Wednesday to Monday 12-4, May to September). You can saw the KI cellar door dream team, Ruth and Annabel behind the bar, as it were. 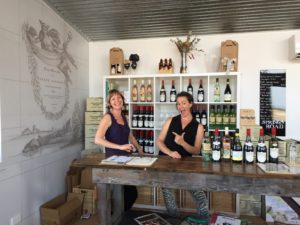 This happened at the same time as the opening of the cellar door on KI. It went hand in hand really. We have a Springs Road Chardonnay, Shiraz, Cabernet Sauvignon and a blend of Shiraz and Cabernet. The Chardonnay is pictured. The wines are available at cellar door on the island (183 Springs Road when wet, 761 Playford Highway when dry) AND here at the Bosworth cellar door too. And soon, very soon, on our new online shop.

Another one under our belts (our 19th vintage actually – I just counted them on my fingers). That means we have to have some sort of ‘do’ next vintage to celebrate 2 decades). Gulp. I think we know what we are doing now, but honestly after all these years and with all of our experience, who did this?  Of course, we never get anything wrong in the office, ever… 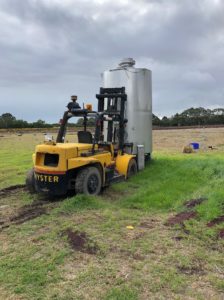 Pump-overs. These are actually a thing! It is the process during red wine fermentation when you drain off the fermenting juice/ wine from the fermenting vessel, and pump it over the ‘cap’ or grape skins which have risen to the top of the open fermenter. The process gives the wine colour, flavour and tannins (structure). It’s an important process so who better to have doing it than the boss. On his birthday. Onya Bozzie

We have had some wonderful people work with us here over the years. Bronnie was our book keeper for what seems like a second but in fact was almost 6 years. She was a veritable terrier when it came to chasing money. She left to go back to nursing, but after updating her training, she was left waiting for the paperwork to go through before she could start work. What to do? Back to Bosworth, that’s what, although this time at the coalface, in the winery. Thanks, Bron and great to see you. 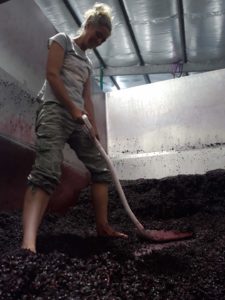 And in other news of leaving, Ruth the Fabulous, who has been instrumental in setting up and running our Springs Road KI Cellar door, is leaving us; she is heading north, swallow-like, to follow the sun. We can’t thank you enough Ruth for your efforts since December, we couldn’t have done it without you. Jane and I headed over to the Island to have lunch with Ruth and Annabel to thanks Ruth for her sterling work. Great tucker from Cactus in Kingscote. 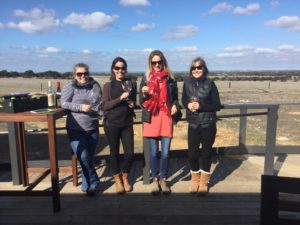 We had some rain! It has been a long time coming. Everything is greening right up now. More of the same, please, and keep it coming. Someone got bemused by the coming down of the wet stuff and found himself stranded on the other side of the bridge. Oh, Oscar. We had rain on KI too, which is great. 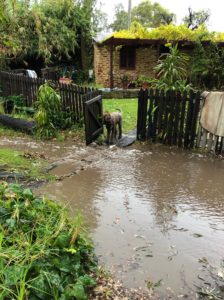 Back in the USA

I have mentioned this fact in a Facebook or Instagram post a while back, but we are excited to be back in the USA market after a not inconsiderable break. We have joined forces with the importers we worked with previously (also known as better the devil you know!). The time was right – the US consumer is more open to the Aussie wine offering after almost a decade off the boil and the Aussie dollar is not so strong! Compelling reasons indeed. The Spring Seed Shiraz and SBS are over there, and the Bosworth Cabernet and Spring Seed Cabernet are on the water as we speak. The ‘Puritan’ Shiraz label (which can legitimately be labelled Organic in the USA, as it has no added Preservatives) has just received approval from the TTB.  Exciting times. An American road trip is on the cards for Bozzie…

Well that’s all for now. Autumn and winter are times for pruning, landscaping (on KI), a bit of travel and bottling and sending wine all over Australia and the globe. Exciting times.