Changing Guard at Battle of Bosworth

We have released our 2016 Single Vineyard Shiraz wines, namely the 2016 Battle of Bosworth Ding’s, Chanticleer and Braden single vineyard wines. These are made in very small volumes.

These wines started life as part of the McLaren Vale Scarce Earth project which was an examination of the role McLaren Vale’s varied soils play in the flavour profile of our most widely planted varietal. We have continued this exploration and celebration of the geological,  climatic and soil diversity of the region by bottling small volumes of Shiraz from our 3 key blocks.  Each small plot of land has a unique flavour profile and personality.

All wines have been hand-made, hand bottled and are unfiltered. Our 2016 red wines support the old McLaren Vale theory that even years always make bigger, richer styles of wine. We had a windy, dry spring and September and October were warm. November was cooler than average. We had a massive downpour (50mm in Willunga) at the end of January which turned even more of Joch’s hair grey, but this was just what we needed – it refreshed the vines and heralded a lovely even ripening period. The lawn was probably most appreciative of the deluge!

Ding’s is the youngest vineyard, and the southern most block (not by much mind you). It is also planted on east/ west orientated rows. The vineyard was planted nearly 20 years ago and Joch’s faithful hound Ding is buried under the first panel of row one. We battled the Little Corella’s when getting the vines up and running; after the first years growing season the vines had reached the wire (onto which they would have been trained along) before the dastardly little white parrots flew in one day and chewed the lot off. Because they could. 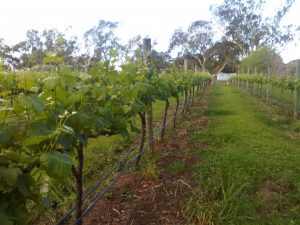 Chanticleer is 35+ years old and is the furthest north in our block of vines. Rows are planted north/ south and soils are the free draining Urrbrae stony loam soils, the same as Ding’s. 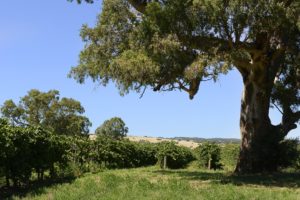 Bradens block is off the main road between McLaren Vale and Willunga, and soils comprise mostly the black cracking ‘Biscay’ soils which are really quite shallow. They don’t drain as freely in winter as the Urrbrae soils, which is why you often see water standing around during winter. In summer, as the name suggests, it dries out and cracks, often quite impressively.

Many years ago I got a couple of trade customers bogged in my car on the black, cracking soils when I worked for Parky at Penny’s Hill. Very humiliating, even more so when Toby Bekkers then of Paxton Vineyards (now one of the Bekkers behind Bekkers Wines) had to tow me out with a tractor….

The wines will be available in cellar door (RRP $45.00) on weekends for tasting, and via mail order too; give me a shout to find out more by clicking here!