Joch headed to the InterContinental Hotel in Adelaide on Friday (the 14th September) to collect the Professional Judges Award in the Organic category for the 2010 Battle of Bosworth Shiraz. The Shiraz was also runner up in the Consumer Judges award. Very exciting indeed. 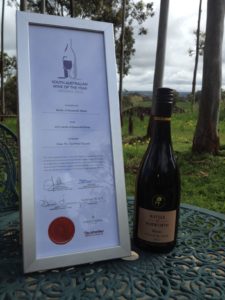 This is the third year in a row that we have jagged the Professional Judges award in this category. We won in 2010 with the inaugural 2010 Preservative Free Shiraz (and won the Consumer Award with the 2009 BoB Cabernet Sauvignon), then picked up both the Professional and Consumer Awards in the organic category with the 2010 Battle of Bosworth ‘Clarence’ Sticky Semillon in 2011.

We still have some of the 2010 Battle of Bosworth Shiraz available for tasting (and sale) in cellar door so hop along and have a try. We are open Friday, Saturday, Sunday and Monday from 11-5pm.